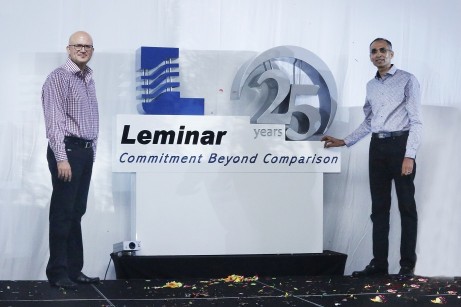 The event also marked the company’s robust growth in the period between June 2015 and June 2016. Some of Leminar’s key achievements during the financial year include the inauguration of its 168,000 sq.ft Central Logistics Centre in Ras Al Khor, the opening of its new showroom in Deira, and the addition of a new warehouse in Kuwait.

Navin Valrani, CEO of Leminar and Pramodh Idicheria, General Manager, unveiled the company’s new logo on this momentous occasion, which was witnessed by over 320 people including employees and their families.

Navin Valrani said, “Over the course of 25 years, Leminar has grown from a small business representing a single brand to an industry leader with over 20 global brands in its product portfolio. We have also expanded geographically and have a significant presence in Qatar, Kuwait and Oman, in addition to the UAE.”

“Our success can be attributed to the company’s genuine commitment to exceed customer expectations by not just bringing to market best-in-class HVAC products, but also by introducing distinctive services such as maintenance programs, stress analysis, seismic analysis and plant room calculations,” he added.

Pramodh Idicheria said, “Our business revolves around three factors – our staff, our brands and our customers. We are fortunate to enjoy the trust and loyalty of all the three. Our staff, some of who have been with us from the very beginning, is the key reason we are able to engage and retain brands that are among the top three in their respective categories.”

The silver jubilee celebrations featured children’s performances, songs and music, group dances and a fashion show. Another highlight of the evening was the award ceremony for recognising the best employees for their performances in the year 2015. Employees who completed 10 and 20 years of service were also felicitated for their long-term commitment to the company.