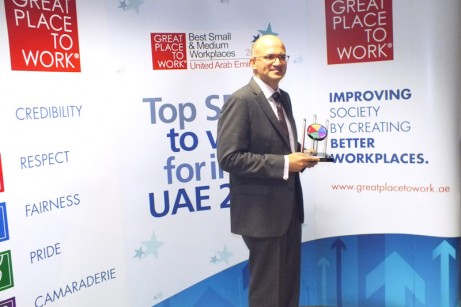 Leminar Air Conditioning Company, a leader in the HVAC distribution network across the GCC, has been named by the Great Places to Work Institute as a “Top Company to Work for in the UAE”.

In a recent event, Human resource management consultancy Great Place To Work (GPTW) released its list of Top to Work for in the UAE at an awards ceremony in association with Dubai SME 100. It is the first time GPTW has released a Top SME list for the UAE.

This year’s official rankings of the top 5 SME’s, released by GPTW, places Leminar firmly among the top companies which were finalized after reviewing the confidential feedback received from their employees and an independent audit of their human resource practices.

Commenting on the award, Leminar’s CEO Navin Valrani said, “Our company developed a strategy six months ago and we were driving towards that goal, a Great Place to Work is one where employees trust the people they work for, have pride in what they do and enjoy their workplace and the people they work with”.

The Great Place to Work Institute recognizes the best workplaces in over 45 countries worldwide after assessing what companies do on a daily basis to earn and sustain the trust and respect of their people. Two-thirds of a company’s score is based on the results of the Institute’s proprietary trust index survey, which is sent to a random sample of employees from each company. The survey asks questions related to their attitudes about management’s credibility, job satisfaction, and workplace camaraderie.