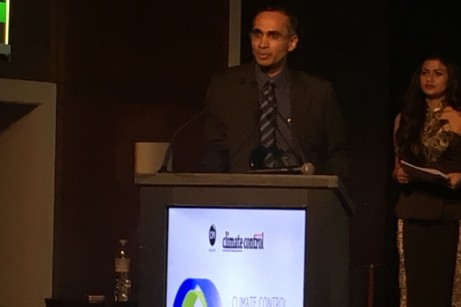 November 24, 2015 – Dubai, UAE: Leminar Air Conditioning Company won the Climate Control Middle East 2015 Award for the “ HVACR Accessories Provider of the Year 2015“, in a heavily contended category. The award function which unfolded at the prestigious Jumeirah Emirates Towers Hotel on the 23rd of November featured the finest of HVAC establishments from across the GCC and senior executives were in attendance representing all areas including District Cooling , Air Conditioning, Refrigeration and Ventilation. It is worth mentioning that Leminar also won this award in 2012 and 2013 in a similar category.

Judges at the event said the winners in each category demonstrated the best trends in the market fulfilling stringent criteria and where Leminar category criteria included the ability to forecast customer demands, report management, product quality and reliability, and prompt delivery coupled with after sales and support.

Pramodh Idicheria, General Manager of Leminar, collected the award on behalf of the organization and thanked Climate Control and the judges saying: “it is indeed a proud moment for Leminar as this award is a true recognition of what we stand for in the industry. Leminar continues to believe that offering services beyond customer expectation is key to our success. I would also like to thank all the principals whose support made us what we are today. “

In the UAE since 1991, Leminar Air Conditioning Company, a member of the Al Shirawi Group of Companies, is the largest HVAC distribution company in the region, with offices in UAE, Qatar, Oman and Kuwait. The company represents some of the leading brands in the HVAC industry such as Rheem, S&P, Weicco, Alfa Laval, Hattersley, Frese , Mueller, Twin City, Napco, Armacell, Kimmco etc.