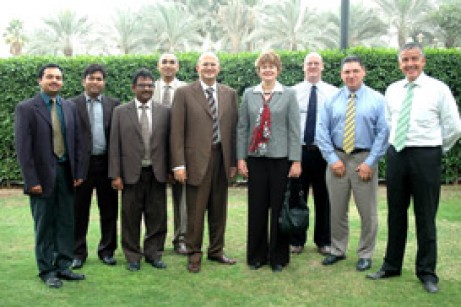 Hattersley, a leading brand of Crane Building Services and Utilities, has appointed Leminar Air Conditioning Company as their distributor in Qatar. Hattersely supplies a range of branded valves for use in heating, ventilating and air-conditioning systems for the commercial, industrial and institutional construction industry. The agreement was signed between Mark Youssef, President of Crane Company Middle East and Africa, and Navin Valrani, CEO of Leminar Air Conditioning Company.

The origins of Hattersley date to1897, when 20-year-old Richard Hattersley started a small tool-making business in Halifax. In the early 1900’s he relocated to Ormskirk, and in 1910 he joined with three other engineering companies, including Newman Hender & Co. of Woodchester, to form United Brassfounders & Engineers. Today, the Hattersley brand is synonymous with quality, reliability and service to the very highest standards, knowledgeable in all relevant industry sectors – including heating and ventilation, mining, chemicals, textiles, drugs, waste treatment and power generation. Hattersley can supply a skillfully engineered solution for every application. Flagship products include a full range of commissioning valves suitable for constant and variable flow systems.

In the UAE since 1989, Leminar, is the largest HVAC distribution and manufacturing company in the region, with 4 offices, 4 manufacturing plants and 9 showrooms across the UAE and Oman. Leminar’s facilities have obtained certifications such as ISO 9001, AHRI (ARI) and various awards in the industry.