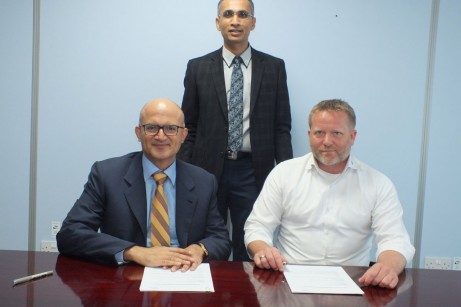 Kuwait City, Kuwait; April 13, 2016: Leminar Air Conditioning Company WLL, Kuwait, the leading distributor of HVAC/plumbing products, has signed a distribution agreement with Georg Fischer Piping Systems, Switzerland, for the supply of their full range of piping systems in Kuwait. The new agreement will widen the existing portfolio of renowned international brands for Leminar and provide Georg Fischer with access to the comprehensive distribution network of Leminar in Kuwait.

Navin Valrani, CEO of Leminar Air Conditioning Company WLL, said, “Leminar is committed to delivering quality products to our growing customer base in Kuwait. The new distribution agreement will meet the needs of commercial and industrial customers looking for Georg Fischer Piping Systems. We expect this agreement to accelerate growth of our market share in Kuwait.”

Founded in 1802, Georg Fischer Corporation is headquartered in Switzerland and is present in 32 countries with 121 companies, 45 of them being production facilities. GF Piping Systems is one of the three divisions within Georg Fischer Corporation. GF Piping Systems has more than 30 manufacturing facilities and research and development centers, with a turnover of € 1.4 billion.

About Leminar Air Conditioning Company WLL:
Leminar, a member of the Al Shirawi Group of Companies, is the largest HVAC distribution company in the region with 6 showrooms across the UAE and offices in Abu Dhabi, Dubai, Sharjah, Oman and Kuwait. Located at the Al Rai area of Kuwait, the showroom features a one-‐stop solution for mechanical contractors’ HVAC requirements. Leminar represents the world’s leading brands in the HVAC and plumbing industry and prides itself on being selected as HVAC supplier of the year in 2015 and also one of the “Great Places to Work” in the UAE in 2016. For more information, please visit www.leminar.net