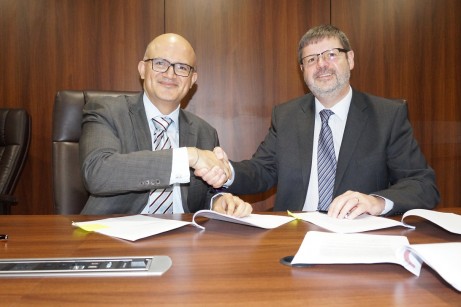 Dubai, UAE, 11th June 2017: Leminar Air Conditioning Company, the leading distributor and service provider of HVAC and plumbing products in the GCC, announced that it was appointed the exclusive distributor for Hattersley’s full range of HVAC and Plumbing valves in Kuwait. Leminar is presently the distribution partner for the brand Hattersley valves in the UAE as well.

The agreement was signed between Richard Tuck, President of Hattersley, and Navin Valrani, CEO of Leminar Air Conditioning Company. Accordingly, Leminar will supply Hattersley’s traditional valves, including ball, butterfly, check, gate, and globe valves as well as a range of balancing solutions for constant and variable flow systems for customers in Kuwait.

Tuck said: “Hattersley brand is synonymous with quality, reliability, and service to the very highest standards and we insist on having partners who can match up to us. Leminar exceeded the expectations and played an important role in strengthening our regional presence. With their continued support, we hope to achieve remarkable success in Kuwait as well.”

Valrani commented: “As a business, it has been our strategic objective to add reputed brands to our portfolio. In 2013, when the alliance with Crane materialized, we were confident this was a brand that had so much to offer on projects in the region. The success we found in the UAE proved us right and we look to repeat the same in Kuwait.”

Hattersley, which originated in the UK, is part of Crane Building Services and Utilities. It will be one of Leminar’s key principal suppliers in Kuwait along with other significant brands like Georg Fischer, RUUD, Mueller, Alfa Laval, NAPCO, Winters, Armacell, and Clima Uno.

Earlier in the year, Leminar had also formalized a distribution agreement with Mesan USA for the supply of its CTI certified products in Kuwait.

About Leminar Air Conditioning Company WLL
Leminar, a member of the Al Shirawi Group of Companies, is the largest HVAC distribution company in the region with 6 showrooms across the UAE and offices in Abu Dhabi, Dubai, Sharjah, Oman, and Kuwait. Located in the Al-Rai area of Kuwait, the showroom features a one­‐stop solution for mechanical contractors’ HVAC and plumbing requirements. Leminar represents the world’s leading brands in the industry and prides itself on being selected as HVAC supplier of the year in 2016 and also one of the “Great Places to Work” in the UAE in 2016. For more information, please visit www.leminarkuwait.com